Why Didn’t the Fed’s Quantitative Easing Program Cause Massive Inflation?

In normal times, the Fed responds to economic downturns by lowering its federal funds rate target. This is the rate banks charge each other for overnight loans. But, by late 2008, the Fed had already cut the federal funds rate to zero. With the economy still reeling from the financial crisis, the Fed’s preferred mechanism for softening economic blows was maxed out.

To prevent the economy from sliding into depression, the Fed turned to a new tool, quantitative easing. It worked like this. The Fed purchased assets like mortgage-backed securities and U.S. Treasury notes from banks, crediting their reserve accounts at the Fed with new money created at the stroke of a computer key. Between 2008 and 2014, the Fed expanded its balance sheet by $4.5 trillion dollars in this way. Many feared that such a massive expansion would cause runaway inflation. But, many years down the road, those fears were never realized.

Quantitative easing provided banks more funds in excess of the minimum reserves banks are required to keep on deposit with the Federal Reserve. This gave banks access to more money, which in turn helped shore up banks’ precarious financial situations and encouraged them to make more loans.

One reason quantitative easing didn’t cause massive inflation is that much of the money the Fed created never actually made it out into the real economy. Inflation is simply a rise in prices. When more money is injected into the economy, there’s more cash sloshing around to buy stuff, and greater chance people will be willing to pay more for the stuff they buy. But, money that exists only as digital zeros and ones on computer servers doesn’t have much impact on the economy. It is only when banks loan those reserve balances out that they become high-power money that interacts with the real world.

The Fed publishes several measures of the money supply that help us to understand how this works. Excess reserves of depository institutions rose sharply during this period. But M2, a measure of the money actually out in the real world interacting with people and businesses rose at a more modest rate in line with historical trends. 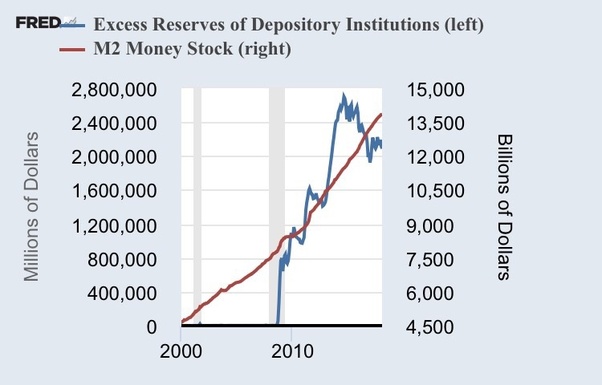 When prices are falling, people wait to buy things because they expect prices to fall lower. Why buy today that which will be cheaper tomorrow? Lack of buyers drives prices down further. The cycle continues and the economy grinds to a halt. The liquidity that the Fed injected through quantitative easing helped arrest the slide of asset prices, but it wasn’t enough that prices would rise uncontrollably.

Whether a massive liquidity injection will cause hyperinflation depends a lot on what’s going on in the economy at the time. If the Fed were to have injected trillions of dollars into the economy during a boom time, it certainly would cause inflation, and in the right circumstances, maybe hyperinflation. Banks, anxious to lend, would readily convert their bigger reserve balances into high-power money through expanded lending. Awash with money, people would buy up everything in sight, increasing demand and driving prices skyward. As prices soared, they’d keep buying, assuming that things will be more expensive later. Thus, hyperinflation.

At the height of the financial crisis, the problem was that asset prices were falling and banks were hoarding money as they hunkered down to weather the storm. The economy was seizing up. Like priming a cold engine, quantitative easing gave the economy a jolt to get it going again.

“We didn’t know what was on the other side, and the magnitude of what might happen if we did nothing was so frightening that we didn’t want to find out.”

Quantitative easing was arguably a risky move. Overdo it and the economy might cross a point at which deflation tips over into inflation, even hyperinflation. But, runaway deflation is far more dangerous. It seemed worth the risk.

As a U.S. Treasury official who served at the height of the crisis explained to me a few years ago, it was possible the economy would have come back on its own without all of the unprecedented interventions.

“But,” the official told me, “we didn’t know what was on the other side, and the magnitude of what might happen if we did nothing was so frightening that we didn’t want to find out.”

Was Obama the First President Without a Full Year of Three Percent GDP Growth?

Axis of Reason: Crazies & The Caravan